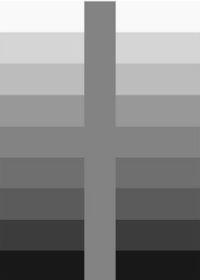 When I was in my second year of college, originally studying architecture, I was required to take a painting class. I remember creating a color wheel which helped us to understand the variations of shades and the manner in which colors work together. I often think about that exercise when I walk through Lowe’s and see the paint chips and all of the selections that are available for decorating. There is beauty in the shades, but there is also a lot of confusion if we don’t know how colors work well together.

For almost every color there is a base color, sometimes known as hue. In the gray color chart the base is seen at the center, vertically and horizontally. It is especially interesting to note how the hue seemingly changes by comparison to the colors at the extreme ends (white and black).

There is a popular book, that has now been made into a movie, that made me think of these early days of art training because of its title: 50 Shades of Grey. I haven’t read the book, nor will I see the movie. The reason being, I believe that we are compromising the best of our imaginations by allowing the subtle “shades” of appropriate sexuality presented to cause us to drift from God’s best for our minds in the realm of sex and intimacy. The definition of the base values of sex, intimacy, and marriage are being redefined by the world. It is as if the base color is changed to a lighter shade. This means as the base shifts when a comparison is made it is less noticeable on one end and much more noticeable on another. So, in comparison, because there is a shift in the perception of what is normal for healthy sex and intimacy, what 50 Shades of Grey depicts is not so distinct from the perceived base. Most won’t notice the variation that has occurred in comparison to the true base, which is the biblical standard for sexuality.

So as Christians, how are we to rightly think about these matters? Oswald Chamber addresses the use of imagination. He writes, “Imagination is the greatest gift God has given us and it ought to be devoted entirely to Him.” I believe that the imagination of most Americans has been diverted from Him and the reason we are turning to other sources for creativity in our thinking is that we are people who have starved our imaginations by thinking too little on Him. The replacements give us shades of the best God has in store but when brought together to compare with the standard there is a recognized discrepancy and contrast. But we don’t look a the true base. We have instead shifted the base and are not discerning the real contrast of values.

Isaiah 26:3 reads, “You keep him in perfect peace whose mind is stayed on you, because he trusts in you.” The key is that the mind focused on God discovers peace. When one’s mind is consumed or circuited on things other than God’s best, then the result is chaos – the absence of peace. I believe that the truth of this verse is foundational for Paul’s purpose in writing Romans 12:2, “Do not be conformed to this world, but be transformed by the renewal of your mind.”

Lest you think I am just on a soapbox about this book and movie, consider this statement found on the Medical Daily site, “Bonomi and her colleagues collected data on 650 female participants aged 18 to 24. More than women who hadn’t read the books, consumers of Fifty Shades were found to be exposed to several unhealthy behaviors. They were more than 75 percent more likely to have used diet pills or fasted in the last 24 hours, 25 percent more likely to have partners who swore at them, and 34 percent more likely to have a partner who demonstrated stalking tendencies. They also tended to binge drink and have more sexual partners.”

The quoted article continues, “Unfortunately, a 2013 study performed by the same researchers found the series perpetuates ideas about domestic violence that aren’t necessarily conducive for progress. Many of the behavior patterns found in the series’ main character, Anastasia, reflect the telltale symptoms of someone who has been abused by a partner. Eroticism may be the crux of the book, Bonomi says, but that doesn’t mean domestic violence is being utilized to push the correct agenda.”

With statements like these there is sure to be reaction and criticism. My point is to address that there is certainly concern and potential problems created by the books, and there will be more concerns and problems that result from the movie. If we are unguarded regarding our careful and critical thinking, we will find a compromise of Biblical standards to have happened.

God has called us to worship Him with our minds. I think we too often quote this following passage in a trite way, but it is especially convincing to me that we need to consider the Scripture in light of what our minds are entertained by the things of the world . Unfortunately we are far too often too casually entertained by those things. So let me encourage you from the Scriptures, “Finally, brothers, whatever is true, whatever is honorable, whatever is just, whatever is pure, whatever is lovely, whatever is commendable, if there is any excellence, if there is anything worthy of praise, think about these things. What you have learned and received and heard and seen in me—practice these things, and the God of peace will be with you.” (Philippians 4:8–9 ESV)

I hope that we can be people who talk about the beauty of sexuality and design as God has created it. I also hope that we can be redemptive in relationships with those who crave healthy intimacy and bring counsel and restoration to those who have experienced abusive relationships. I believe that is one reason that the book (and the others in the trilogy) have gained in popularity; people are longing for better answers than what they are getting.

One Christian woman wrote the following on her blog,
I have thought a lot about whether or not Jesus would speak about this if He lived today. And I decided this. No. He probably wouldn’t. He wouldn’t waste one breath on seeing this particular movie.

But do you know what He would have done? He would have addressed the bigger heart issue that our society is facing which is the lack of respect and honor for our spouse in a culture that is saturated with pride and selfishness.

He would have reminded us that our marriages are designed as a reflection of Christ’s love for the Church (us.)

There is an excellent article on the Christian Post which addresses the reasons for the book(s) popularity.

“Fifty Shades promises many women this love in the way that Christian Grey understands and knows Anastasia Steele intimately without words, but it fails to fulfill the expectations of its audience. The book fails in two different ways, Fincher argued.

In the books, “you find out that Anna doesn’t even have a self to be known,” Fincher said. The author explained that while it may be alright for the main character – a college student – it is a mark of immaturity for most of the middle-aged women who devour Fifty Shades. Further, it means the novel’s romance fails to capture true intimacy.

“Intimacy can only happen when you have two separate selves that decide to know each other,” Fincher noted. Some people think “you can ride into intimacy on sex alone,” but that isn’t true.”

I pray that each of us carefully consider what we are doing to have our minds stayed on the Lord, so that His perfect peace is ours. Let us not be too casually entertained, finding ourselves shifted from the standard of God’s best and falling into chaos because we are attentive to counterfeits or shifted standards. Instead let us reason together on biblical grounds to discover the best that God has to offer, studying his Word and the truth. For married couples, this doesn’t happen by reading or watching erotica. Peace and satisfaction in marriage develop based on biblical principles being carefully communicated between husband and wife to build godly character, values, and intimacy.