Glory and Faith – Their Incredible Relationship

Glory and Faith – Their Incredible Relationship

In yesterday’s message on Soli Deo Gloria, I meantoned 15 occurrences of the word glory in the book of Romans.  The Lord has impressed me to take a further look at a few of these and share some of the insights into the Scripture’s teaching and the implications for us.

I begin by looking at Romans 4:20, which happens to be in the context of Paul’s teaching regarding Abraham’s faith and the birth of Isaac.  It reads, “No distrust made him waver concerning the promise of God, but he grew strong in his faith as he gave glory to God.”

I think that this is an incredibly important verse because it brings the two key elements of faith and God’s glory together in a way that helps us see their relationship in a practical manner.  Fatih can be looked at this way: “The man who has faith is the man who is no longer looking at himself, and no longer looking to himself.  He no longer looks at anything he once was.  He does not look at what he is now.  He does not look at what he hopes to be as a the result of his own efforts.  He looks entirely to the Lord Jesus Christ and His finished work, and he rests on that alone.” (1)

When we have any measure of faith and exercise it properly, the outcome is that our sights are set on Jesus, the author and finisher of our faith, who is revealing the glory of God.  I love the practical aspects of Paul’s illustration because he identifies the struggle we all have through the example of Abraham.  In every aspect of Abraham and Sarah’s life they should have given up on their desire to have a child.  However, because their faith was grounded in this glorious God who had continued to reveal Himself as faithful and true to His promises they knew that there was hope.

The main explanation of the troubles and difficulties which most of us expirence in our lives is that, instead of keeping our eyes steadfastly on God, we look at ourselves and our weaknesses and the staggering greatness of the life to which we have been called.  We look at these things and we become weak and begin to stagger.  Abraham did not stagger fro the reason that he gave glory to God.  He kept his eyes on God, and he looked to God. (ibid)

When you stagger due to life’s circumstances, does your focus go to God?  I tend to grown impatient.  There is a verse in 2 Peter 3:9 that says, The Lord is not slow to fulfill his promise as some count slowness, but is patient toward you (though the context speaks to some other specifics the following is true as well).  This verse emphasizes the eternality of God.  For us practically (from Abraham we learn this), God is sure to work in His timing.

God is also Omnipresent.  We often feel that he is not there, that our prayers don’t rise above the ceiling, but this is simply not the case.  The many unanticipated appearances of God in Abraham’s life display this truth, and I think one of the major reasons for Abraham’s strong faith. 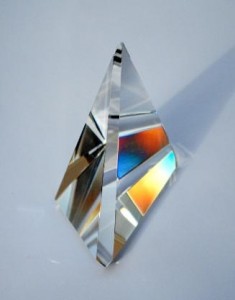 Consider that God is also Omnipotent, having no limit to His power.  This emphasizes His ability to provide the offspring as promised early in Abraham and Sarah’s life.  Abraham was able to find assurance in this attribute of God as He revealed His glory to him.

If we were to list any number of other attributes of God, we would easily admit that Abraham must have considered these as his faith matured.  For God is righteous, He is just, He is the God of truth, and the God who alone is holy.  God is unchanged and everlasting in His consistent and all of these attributes.  So in each of these His glory is revealed.  That character of God is revealed to us in a manner that is like seeing the many facets of light refract through a prism. We may not be looking directly upon the source (for He is holy and we are unable), but we can see the many aspects of the beauty of the light because it is refracted through the prism.

So I want to encourage you today to model Abraham’s life and faith, to be encouraged by Paul, and to look to God’s glory so that your faith may be strengthened.  This will in turn extol the glory of God by your testimony of faith.